The Sun and the Cave One day the sun and a cave decided to have a conversation. During the chat, the sun was having a difficult time understanding what the cave meant by “dark, closed and dank” and the cave was confused by the sun’s notion of “light, open and clear”. So, they decided to change places and share perspectives.

The cave went up into the sky and took the sun’s view and remarked: “Ah, I see, this is remarkable and vast - truly marvelous!”

After a while the cave invited the sun to visit his world: “Now come down and see where I have been living,” the cave encouraged.

The sun went down to the cave and after a while said, “Gee, I don’t see any difference.” 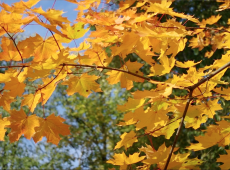